Poly-B or polybutylene has been widely used as supply pipes for potable water as well as hot water radiant systems in the US in the 1970's and then in Canada in the early 1980's. Much less expensive than copper and easier to install. In addition, it was more flexible and less noisy.

The chlorine contained in the water affects the Poly-B pipes. As the concentration of chlorine in water is higher in the United States, many cases of joint leakage and sometimes elsewhere along the pipes have been reported. So much so, that a $ 1 billion class action has taken place in the United States. In Quebec, the class action, initiated in 1998, was settled in 2004, in which a complaint procedure was instituted for the owners concerned. The deadline for the complaint was June 18, 2005.

The acetal plastic fittings disintegrated on contact with chlorine in the water and the higher the chlorine level, the faster the reaction. Manufacturers ceased producing these conduits in 1995, and CBC's MarketPlace revealed in 1999 a report that appeared to prove the product's defectiveness:

This internal memo from Shell Chemical, which reads "Admit our product stinks ...»! 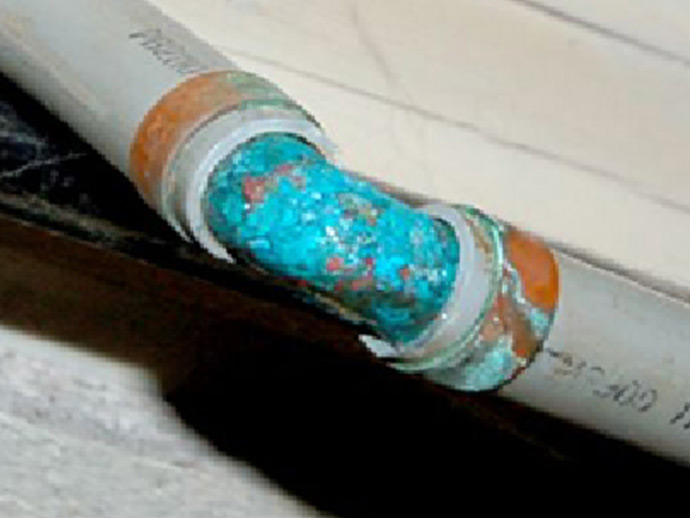 In Quebec, more than 200,000 buildings are equipped with this type of pipe. Some say that there is no problem here because the chlorine content in the water is much lower than in our southern neighbors.
Could the rapid emergence of problems in the United States occur in Quebec in the near future? The future will tell.

Should I replace these pipes?

The Consumers Association for Quality in Construction (ACQC) as well as Desjardins Home Insurance denounces few problem cases in Quebec. The use of copper fittings, used since 1986, would also reduce the risk of leaks.

On the other hand, during inspections, I noticed several cases of gray-green and ooze at the junctions of Poly-B plumbing pipes. I recommend, as a precaution, to replace accessible pipes and other less accessible pipes during future renovations. The presence of Poly-B should not affect the value of a home and given the low cost of replacement with PEX (polyethylene), it would be wise to make these changes.

Radiant heating in Poly-B, is it problematic?

Some hot water central heating systems have Poly-B pipes. The oxygen permeability of these pipes promotes the occurrence of accelerated rust inside the metal components of the heating system. From the mid-1990's, following the discovery of this problem, manufacturers have modified these pipes, so that they are oxygen-tight.

The end of Poly-B, the beginning of PEX

Polyethylene (PEX) appeared in the late 1990's in Quebec. These plastic pipes are more flexible and much less expensive than copper, are oxygen-tight and the fittings are more resistant. They have been used in Europe for 30 years without problems. Plenty of houses today have a water supply by this type of pipes, with the exception of some cities where municipal regulations prohibits it.