Vermiculite is a granular insulation in color ranging from silver-gold to gray-brown. It is bright in its natural state and is similar to animal feed. It was used in the 1920's to 1990's to insulate roof voids and sometimes even in wall cavities and in rare cases, under floors. This insulation is inexpensive, incombustible, unalterable, rot-proof (stable, inert, attracts neither insects nor rodents). In addition, it has excellent sound and heat insulation.

What is the problem with vermiculite?

The problem is that it can contain amphibole asbestos that can be harmful to health, if inhaled. Nearly 300,000 residences in Canada have been isolated with asbestos-contaminated vermiculite from the Libby Mine in Montana as Zonolite® Attic Insulation. Asbestos fibers, when present in the air, represent a risk to the health of people being exposed. It should be noted that it is not all vermiculite that contain asbestos. Only a laboratory specialized in materials analysis that can contain asbestos can confirm this by testing samples. 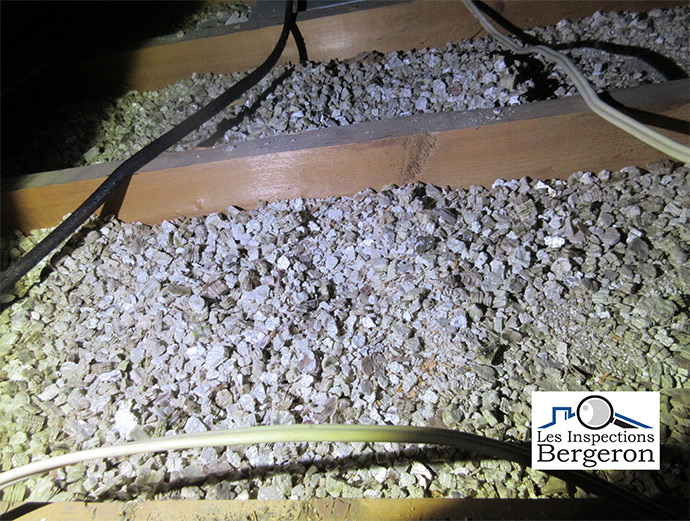 Often, this insulation is hidden under mat insulation, in the attic space. It is important to lift the insulation in a few places to confirm or not the presence of vermiculite.

« The mere presence of a non-compliant material in a building, or even a residence, does not automatically mean that the building is affected by a hidden defect » wrote the Court of Quebec in 2009.

What are the risks?

According to Health Canada, removal of vermiculite containing asbestos is not mandatory if the insulation is not in a habitable space such as an attic space. « If you do not touch it, there is no problem. »

On the other hand, having vermiculite insulation could have an effect on the selling price and some precautions must be taken to reduce the risk of exposure :

The buyer will often require the removal of vermiculite containing asbestos after the home inspection, which can represent very significant costs, because only professionals following a protocol can carry out the work. These protocols are necessary because asbestos is very volatile and represents risks when inhaled into the lungs, such as asbestosis (lung disease), mesothelioma (tumour) and lung cancer.

It is therefore important, following a pre-purchase inspection, to have the insulation that can contain asbestos analyzed.

How to do the analysis?

The best way to do this is to hire a specialized firm that sends a technician on site to take the samples. Most companies recommend taking 3 separate samples, as the concentration of asbestos in the insulation may vary from sample to sample. One sample can be tested negative and the second, taken a few feet farther, positive (more than 0.1%). An air test is also recommended following the removal of vermiculite.